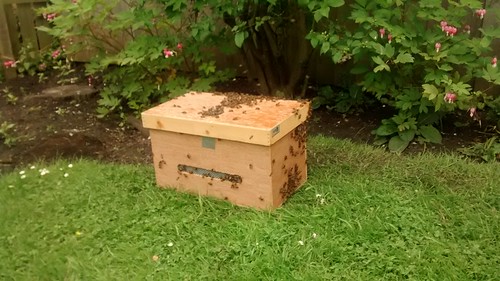 I had another call today about bees in a constituent's garden. This time however it wasn't bumble bees. As soon as my constituent said there was a large cluster of them on a tree, I knew it was a honeybee swarm. I was around in minutes, complete with my smock, gloves and swarm box. Alas, this swarm decided it was not going to be straightforward capturing it. I shook it from the tree into the box but when I returned a couple of hours later, I found that the swarm had left the box and was sitting on the lawn as a perfect circle. I had never seen bees do this before. 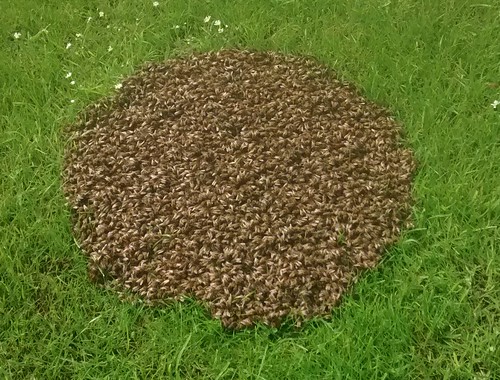 I had to put my gloves back on and scoop the bees up and drop them back into the box. This time, fortunately, it worked. At 9pm tonight I returned, found the whole of the swarm still in the box and took it to one of my apiaries where I had already set up a hive for it. By 9.30pm, the swarm was in its new home.

The constituent said that she had phoned the council before she phoned me. They charged her £76 for the privilege of planning to call out in a few days' time. I suggested she cancel the visit as the council does not deal with honeybee swarms (they would simply advise her, once they had seen the swarm, to call a local beekeeper who could possibly have been me anyway) and ask for her money back. I understand that was what she did. She was happy to save the money, the council was saved a wasted journey and I was happy to have recovered a swarm which hopefully will produce me some honey.
Posted by Jonathan Wallace at 10:28 PM