A cake with a hole in it 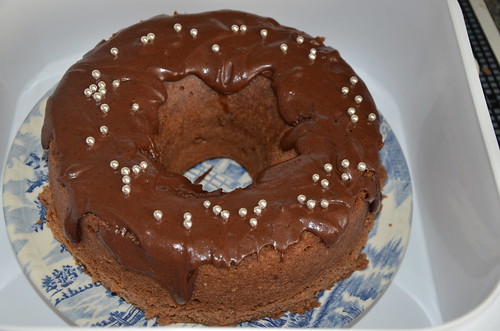 On Friday, at our annual council meeting, Comrade Martin Gannon became Supreme Leader of Gateshead, the Hermite Council of the North East. Martin was the leading advocate of Gateshead's rejection of the devolution proposals for Gateshead. Following his successful campaign to disengage from the North East region, Leader of the Council Mick Henry resigned. Now Gateshead, in splendid isolation, faces being cut off from millions, possibly tens of millions of pounds of devolved funding on transport, training, economic development and other matters. All so that Gateshead Labour Party could make a stand against the Conservative government.

It fell to me as Leader of the Opposition to welcome Martin to his post. I did so by baking him a cake full of bananas which I presented to him at Friday's meeting. The cake had a large hole through the middle of it, representing the gap in the middle of the North East that is Gateshead, The borough will of course get no slice of the devolved cake if Gateshead Labour Party continue to stick by their decision to declare UDI. Or perhaps Martin should see sense, reverse the decision and stop using the people as a stick with which to beat up the government.
Posted by Jonathan Wallace at 9:03 PM