Winning in Whickham South and Sunniside 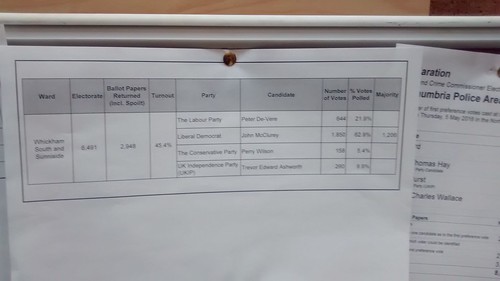 I wasn't up for election in my ward of Whickham South and Sunniside this year, but my colleague John McClurey was. Alas, my record majority (for recent years) of 1199 votes was smashed by John. He added a whopping 7 votes to our lead! But he did notch up 63% of the vote, 13% up on my share at the local elections last year (which coincided with the general election). There was no campaign or literature from the Conservatives and UKIP. Labour's campaign consisted of one leaflet which they paid to have delivered.

As recently as last year, Labour were stating publicly that they would win my ward, though as it was their deputy leader on Gateshead Council, Martin Gannon, who made the prediction, it could not be taken seriously. Nevertheless, just over a decade ago, my ward was a serious target for Labour and they poured everything they could into it. Their campaign then was a disaster and they are still suffering from the fallout in the ward.

So a very satisfactory result. Well done John McClurey!
Posted by Jonathan Wallace at 9:37 AM