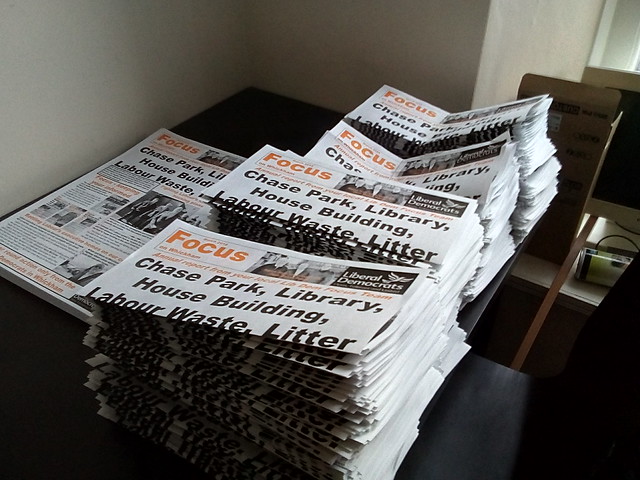 Most of the ward was delivered on the day though some took patches to do this coming week. We also did some canvassing in the afternoon. We deliberately chose the area where Labour's vote was strongest. Admittedly, we excluded from the canvass known hard Labour supporters. However, as our historic canvass in this area is less than the rest of the ward, we still called on lots of doors and I went in with an expectation that we would find lots of Labour voters. We did, except for the fact that a very large number of them are very disillusioned with Labour over local issues. There is a modest shift in voting intention from Labour to Lib Dem. I came away satisfied that we were getting a higher level of support that predicted. When looked at simply in terms of numbers, Labour were only ahead if every polite but otherwise non-committal canvass response was transferred to Labour's column.  Add in those previously canvassed as hard Labour and they move ahead of us. Don't forget however that this is the strongest area for Labour in the ward. That means there is all to play for as this is a ward in which, just 3 years ago, Labour held on by a mere 23 votes. If Labour are struggling in this part of the ward, they will have a real battle to hold in the local elections on 3rd May.

But there is no room for comlacency.....

Lib Dem campaigner Kevin McClurey and me in Poplar Crescent in Dunston.
Posted by Jonathan Wallace at 11:01 PM