How not to drive to the pub 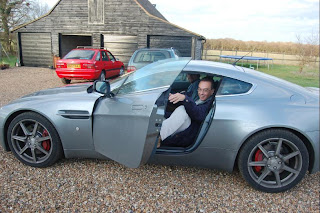 I took this photo of David just before New Year when we were at his sister Sally's house in Kent. We decided to make a visit to the local village pub (for one pint only) which was a couple of km down the road. Sally's husband Michael drove me there in his car, and drove David back.

Room for only two in the car, an Astin Martin drives just a few centimetres above the ground. A rather nice car but it is terrible for increasing your carbon footprint. I'll need to plant another tree later this year to compensate.
Posted by Jonathan Wallace at 7:49 PM