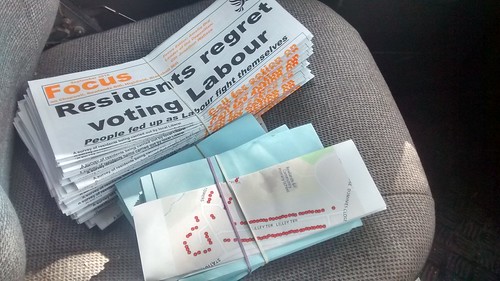 There is a by-election taking place in Chopwell and Rowlands Gill ward on Thursday 22nd September. This is a very strong Labour ward though their strength is based more in the Chopwell part of the ward. In that village, there are streets such as Lenin Terrace and Marx Terrace. That tends to give a bit of the flavour of the ward. In the May local elections, Labour romped home with about two thirds of the vote. There were 5 candidates standing. We came last, though we ran a paperless campaign. This time we have fought it harder. We have delivered focuses and carried out a survey. Sadly, I missed the action day in the ward last Saturday as I was at the Bowes Agricultural Show in Teesdale. (I got 2 second prizes and 2 thirds. Alas, no first prizes this year.) Instead, I was in the ward on Monday delivering more Focuses and letters.

I'm at conference now so I'm missing the final weekend in the ward. There will, of course, be a pile of leaflets waiting for me when I get home from Brighton to deliver!
Posted by Jonathan Wallace at 10:39 AM