Yesterday, the Chopwell and Rowlands Gill by-election was held in Gateshead. This has, for the past one and a half million years, been a Labour held seat and few realistically expected a change yesterday. I was still delivering leaflets in the afternoon, in between attending the accounts committee in the morning and full council in the afternoon. I had a patch were large numbers of houses had trampolines in the garden, one house had a small dog with very large teeth and a loud bark, and streets were named after leading communists (Supreme Leader Comrade Corbyn will be pleased!).

I attended the count, held in Chopwell Community Centre, after milking the goat. Turnout was down at 25%. In the local elections in May, we were 5th (and last), behind Labour, UKIP, Conservatives and Greens. Our aim in the by-election was to increase our vote and move up the pecking order. We actually achieved this, moving ahead of the Conservatives and Greens and nearly catching up with UKIP. We went from 4% to 12% and were the only party to increase our actual vote. So modest progress though still some way to go.

Photo above taken after the count: me, Cllr John McClurey, Chris Ord, Amelia Ord (our candidate) and Kevin McClurey. 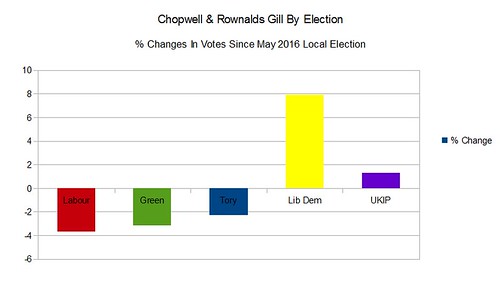 Above: change in share of the vote.
Posted by Jonathan Wallace at 11:56 AM