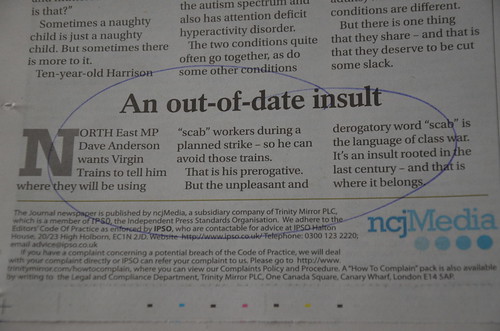 Blaydon Labour MP David (Call Me Dave) Anderson has been shooting from the hip recently about the potential for Virgin East Coast to bring in staff from elsewhere to tide the company over if on-board staff go on strike over changes to working practices. The RMT union is balloting staff now despite Virgin guaranteeing there will be no compulsory redundancies. Mr Anderson has announced he does not want to travel if Virgin uses "scab" labour during the strike. He is demanding Virgin tell him all about their contingency plans should the RMT members opt for strike action so that he will know if he needs to avoid rail travel.

While I respect Mr Anderson's desire to be a go-nowhere Labour MP, I was struck by his crude language. His description of people being employed by Virgin during a possible dispute as "scabs" is rather unworthy. It is his decision not to occupy a seat on a train (though he fills plenty of seats in Corbyn's shadow cabinet where he holds a number of shadow secretary of state positions). His language however needs to be less insulting. He may find his words a big political turn on, but for most people, they are at best uncomfortable and at worst downright insulting.

It was interesting to note however that the Labour-supporting Newcastle Journal was deeply unimpressed by Mr Anderson's language. A leader comment on Wednesday said, "...the unpleasant and derogatory word 'scab' is the language of class war. It's an insult rooted in the last century - and that is where it belongs."

I couldn't have put it better myself.
Posted by Jonathan Wallace at 10:11 AM