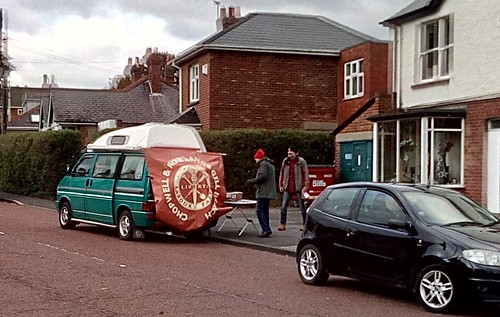 I was in Rowlands Gill yesterday and spotted something that was a blast from the past. Tucked away in a side street was a campervan with a Labour banner draped over the back, set up as a street stall. It was not just any Labour banner but something of great historic interest - a banner with the logo that predated the rose. Popular back in the 70s and early 80s, this was an icon of the Militant Tendency era, of leftwing Labour and and trade union barons. In the Blair years, possession of such paraphernalia was regarded as a crime against the party. All those old banners, undergraduate essays on Marx and "Coal not dole" stickers had to be hidden away in political priest holes. Now the resurgent left are dusting down their cherished banners and their outdated symbols. Whether or not any ordinary member of the public will notice such old-fashioned logos is debatable. After all it's been over 30 years since the rose became the core of Labour's corporate branding. And the two Labour members in Rowlands Gill were not attracting any interest from passers-by, certainly not in the time they were in my line of sight.

Hopefully for the two Labour members involved, they had a great time reliving their youth yesterday!
Posted by Jonathan Wallace at 1:42 PM