My last photo of Paddy 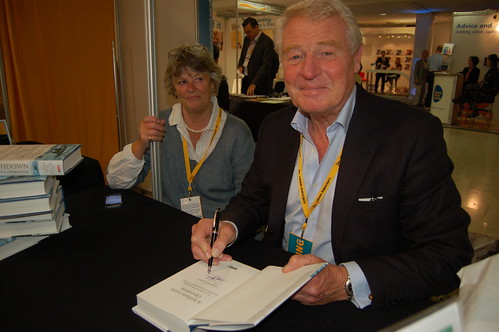 This was the last photo I took of Paddy Ashdown, back in September 2012 at his book signing session at Lib Dem conference in Brighton.

I have some fond memories of Paddy from the early 1990s when I was Lib Dem candidate in Hexham. He visited on a number of occasion. I remember one visit in particular when his office had instructed that during his tour of Tyneside and Hexham, he had to have a rest break. My parents' home in Lobley Hill was the chosen venue. Mam didn't quite get the purpose of Paddy's stay. She cooked and baked a vast array of food even though his next stop was Hexham for the constituency dinner. He was terribly nice about it!

A bit later, in 1998, Paddy came to Whickham when we were campaigning to stop Labour stripping Chase Park of its play equipment (a campaign we eventually won). One of our councillors, Colin Ball, was there and mentioned the name of a friend who lived in Paddy's Yeovil constituency. Paddy knew who Colin was talking about and was able to mention the times he had met the constituent in question. His memory for the details of his constituents and constituency was hugely impressive.

Paddy, you are sadly missed.
Posted by Jonathan Wallace at 10:26 PM