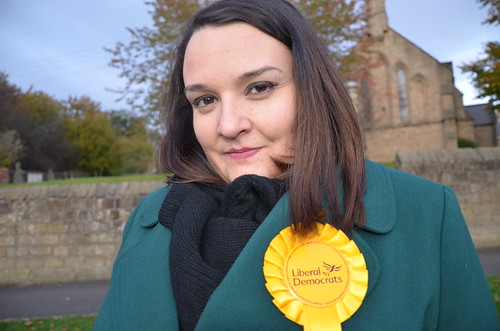 Another news release from Gateshead Lib Dems, this time about the selection of Vicky Anderson as candidate for Blaydon.

Vicky fights for victory in Blaydon

Liberal Democrats in Blaydon constituency have chosen Vicky Anderson as their candidate for the snap general election on 12th December.

Vicky is relishing the battle ahead as she takes on Labour in the constituency they have held since 1935. She has already tasted victory against Labour, having won her council seat from them in May.

“As a councillor in Blaydon constituency and a campaigner with first hand experience of beating Labour, I am taking the battle to the heart of their territory,” said Vicky.

“Labour takes our area for granted but it is time for a change. If elected I will be the voice of Blaydon residents in Parliament. I will be an MP who is in touch with the people of the area. I will demand better for the North East.”

Vicky was born and brought up in the North East and is a passionate advocate of the region which she feels has been let down by both Labour and Conservatives. She is also a strong advocate of equality issues and diversity.

“The North East has not gained from the near monolithic dominance by Labour. We are a diverse society and I am determined that the MPs of the region should also be from diverse backgrounds, both politically and socially. That’s why I am campaigning to put an end to Labour’s monopoly of North East Parliamentary representation.”

Vicky works in online events and has a background in customer service and technology.

Posted by Jonathan Wallace at 10:50 AM