Loathsome Leadsom and the crop failure of Brexit extremists 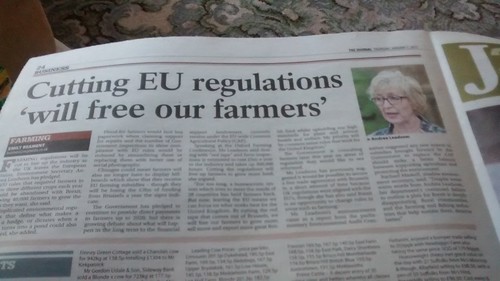 Environment Secretary Angela Loathsome Leadsom is great at planting crops of grass-greener-on-the-other-side-of-the-fence. In this instance, her claims are that the farming industry is set to flourish in the sunny uplands once Brexit has taken place. Those of us with even a limited understanding of agriculture know that the uplands are tough and challenging places for crop production and what can be produced there is limited.

I spotted the claims made by Angela Leadsom in the Journal this morning. What caught my eye was the claim that cutting EU regulations will "free our farmers". What she failed to say was that many regulations come not from Europe but from Whitehall. I keep goats and have lots of DEFRA regulations to follow. The author of some of these regulations is London, some of them are from Brussels. They exist for good reason. Animal welfare, disease control and environmental protection regulations come at a cost but are necessary. Leadsom's suggestion that there could be a bonfire of regulations, "freeing farmers to produce food" may sound great but without an explanation of which regulations are to be incinerated, farmers are in the dark as to just how realistic her rather vague vision is. Given that many DEFRA regulations are additions to European regulations, if the latter are scrapped, we would lose the former as well.

The Single Market is where 75% of UK agriculture exports are sold. Brexit extremists dismiss this with a shrug of the shoulders and make a simplistic suggestion that we can "sell to China instead" (we already can do that). Removing ourselves from our biggest market could seriously undermine the health of the agricultural sector. And far from "taking control" of our country as the Brexit extremist claim, our food security could be put into the hands of nations such as China and India. Fruit growing areas could relocate to Europe if businesses aren't able to recruit European fruit pickers. The Brits simply don't want to do that job and despite efforts to recruit in the UK, fruit growing businesses have been forced to recruit in eastern Europe or face leaving the fruit to rot on the bushes and trees. Many extremist Brexiteers want us to import large quantities of cheap food from Asia where there are cheap labour and poorer environmental standards. That's not "taking back control" - instead it's handing over control to the Chinese Communist Party and to Putin's Russia while damaging the environment at the same time.

This Brexit extremists' vision of Britain dependent on cheap food imports from the other side of the planet could result in the bankruptcy of significant parts of the UK agricultural industry. Farms will lose the £3 billion of European subsidies (much of which pays for environmental protection schemes) and be unable to compete against the flood of cheap imports. Animal welfare standards (the UK arguably has some of the strongest in the world) would have to be significantly lowered to allow the industry to survive against foreign suppliers where such regulations barely exist.

According to Leadsom, farms will flourish once they no longer have to abide by the regulation that they must display signs that they are getting funding from Europe. This rather sums up Brexit: a small gain (in this instance no longer having to display a sign about European funding) which comes with a tremendous cost (losing the £3 billion European funding)! What a mad state of affairs.
Posted by Jonathan Wallace at 11:34 AM