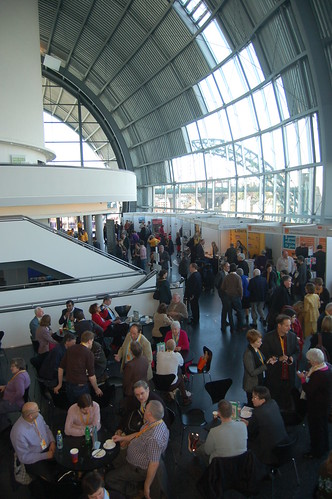 I appreciate that venues suitable for Lib Dem federal conference are limited. And choices of venue are directly affected by costs. But do we have to go to Brighton again? It seems we have got ourselves stuck in a Brighton/Bournemouth autumn conference axis. It has just been announced that autumn conference next year is in Brighton. Yesterday I booked my hotel for this September's Bournemouth conference. There are other suitable venues the party has used in the increasingly distant past - Manchester and Birmingham spring to mind. While not at the geographic heart of the country, at least they aren't on the distant south coast.

Spring conference now seems to be permanently held in York. Okay, it's a bit more central and as it's on the East Coast line, getting there is relatively unchallenging. But there are many smaller venues capable of hosting spring conference. Way back in March 2012, spring conference came to the Sage in Gateshead (see photo above). I guess I am biased in favour of my home town but nevertheless, the constant use of the same few venues in recent years is becoming distinctly annoying.

In a few years' time, we shall have the new convention centre built on  the Gateshead Quays. It will easily accommodate autumn conference. So hopefully the conference committee and office will consider Gateshead as a venue and spread the privilege of hosting conference around the country. Who knows, if everything goes according to plan, I could be welcoming everyone to Gateshead as the Leader of the Council!
Posted by Jonathan Wallace at 1:53 PM