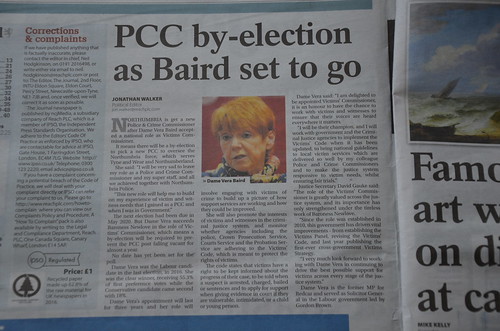 It looks as though we are going to have to go onto election overdrive. It has been announced that Vera Baird, Labour Police and Crime Commissioner for Northumbria, has been appointed as the new Victims Commissioner by the Conservative government. It means she will be vacating the PCC role. Oh joy, a by-election across the whole of Tyne and Wear and Northumberland.

I was the Lib Dem candidate in the last PCC election in 2016, held on the same day as the local elections. I campaigned on the basis that the PCC role should be abolished and its functions should be part of the powers of elected regional government. And then Labour fell apart in the North East over devolution with the North of Tyne going off to do their own thing and the South of Tyne left going nowhere. The devolution and PCC combination will have to be revised!

In the PCC election, there were 4 candidates (this was in the days of UKIP having a presence on the political landscape). I romped home in, errr, 4th place! However, I came second in both Gateshead and Newcastle, reflecting our stronger local government base there. We can now add Sunderland to the list of councils where we are growing significantly.

Personally, I think the vacancy should be left unfilled until next May when the next PCC election is due (on the same day as the local elections). That would save a huge amount of public money (and shoe leather!)
Posted by Jonathan Wallace at 9:26 AM