Eating at the high end 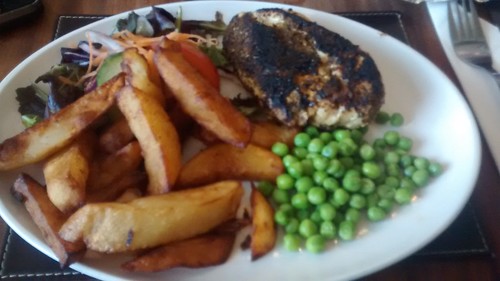 At cabinet on Tuesday morning, out of the blue, Labour councillor Gary Haley suddenly accused me of eating at "high end" restaurants. I'm not sure what the point of his intervention was but I thought it a bit rich for Posh Boy Gary to be making such silly claims. Mr Haley was the failed Labour candidate against me in 2003 and 2004 and I don't really think that Labour ever recovered from his candidacy in the ward. During that time, Mr Haley posed as the person who was safe for Tories to vote for tactically to beat all those leftwing liberals. It was a tactic that totally failed. He then ran away to a safe Labour ward elsewhere.

I suspect that Tory Boy Haley is trying to paint me as something I'm not - a high living individual who splashes the cash. Since I grow most of the food I eat, I hardly need to be eating out very often. Nevertheless, I did eat out recently. I had a pub lunch on Saturday 20th May at the Barley Mow in Birtley. I had cajan chicken and at £6.95 it was one of the cheaper meals on the menu. It was a pleasant meal in the middle of our action day in Birtley.

I have no idea whether or not Posh Boy Haley attends Corbynite cocktail parties but I do recommend he tries the Barley Mow instead. It's not "high end", just nice, friendly and competitively priced.
Posted by Jonathan Wallace at 10:48 PM

You do eat very well but, like you said, for free...if you don't count elbow grease. He obviously knows nothing about you.