On Friday I was the guest speaker at the Whickham U3A. They have regular meetings called "feel good" sessions. Somehow I managed to get an invite to make 40 senior citizen ladies feel good.

I wasn't there with my politician's hat on but rather I was there to talk about self-sufficiency and how I am getting on growing my own food and generating my own electricity. Nevertheless, I was introduced as, "This is Jonathan, you all know him so he needs no introduction!"

I ploughed my way through a powerpoint presentation, complete with lots of photos and some of my videos, showing how we have gone from acquiring a derelict allotment in Sunniside to growing a large proportion of the food we consume. It was also peppered with a variety of jokes about politicians, including feel good factors, duck houses on council expenses (we are planning to get some ducks) and so on.

Last year when I was facing re-election in my own ward, the local newspapers had carried a number of feature articles on my food-growing activities. This created a great deal of interest amongst constituents. When going around my ward whipping up interest in the election, the question most people asked was, "How's the garden?" Needless to say, the Labour candidate was thoroughly beaten, though he did even worse this year.

So, the secret to electoral success in a local election seems to be, get a garden!
Posted by Jonathan Wallace at 6:37 PM No comments:

Even the sun managed to shine

Saturday saw the first Whickham Community Festival. I am a member of the organising group. It was set up to help boost the vitality of Whickham Village. The festival was run to bring more visitors to Whickham centre and it worked well. The theme for Saturday was the Olympics and we had a variety of events though the fun run for the kids in Chase Park had to be cancelled as a result of the ground conditions caused by the wet weather. Despite that, the festival was able to go ahead in St Mary's Green as, believe it or not, we actually had a sunny day on Saturday.

I was tasked with helping to promote the event, put up the bunting in the village (not just any old bunting, Marks and Spencer bunting - one of my colleagues works for M&S and persuaded the company to lend us the bunting used recently in one of their stores), and be the photographer for the day. So here are a few of my pics of the event: 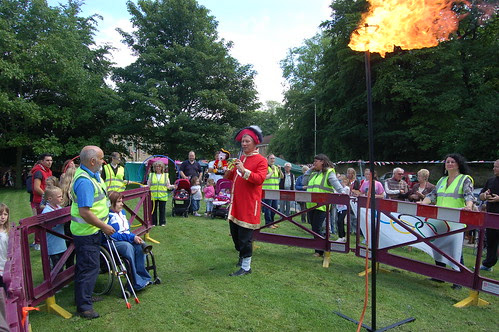 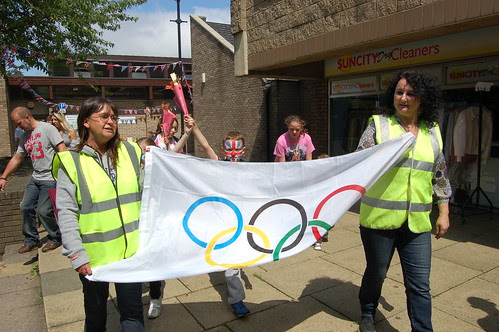 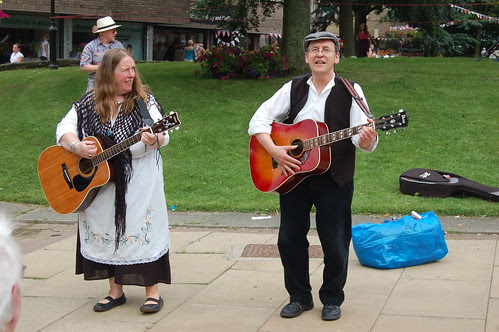 Street entertainment and music was provided all day long 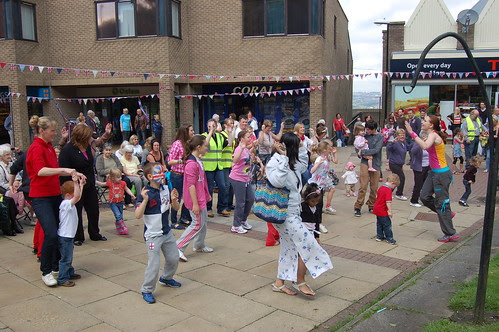 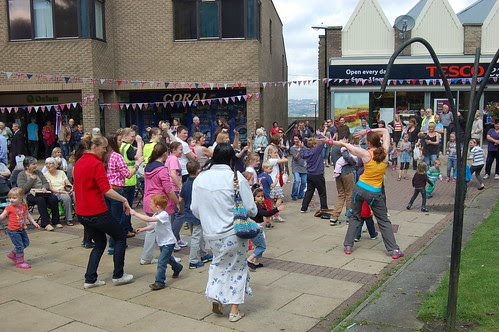 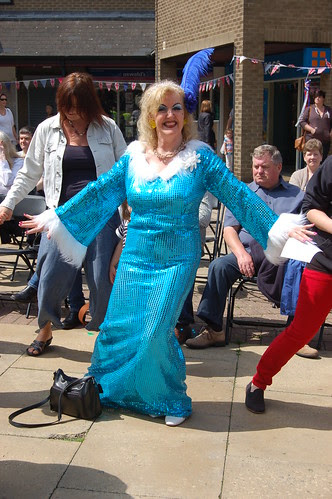 The biggest zumba ever attempted in Whickham. I had a go myself (not a pretty sight!) 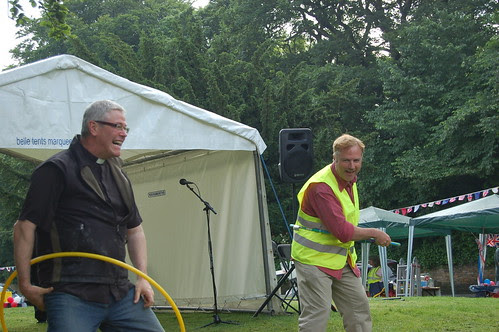 The Rev Barry Abbott beating me at the adults' hoolahoop competition!

Posted by Jonathan Wallace at 9:23 AM No comments:

The dizzy heights - up a ladder with bunting 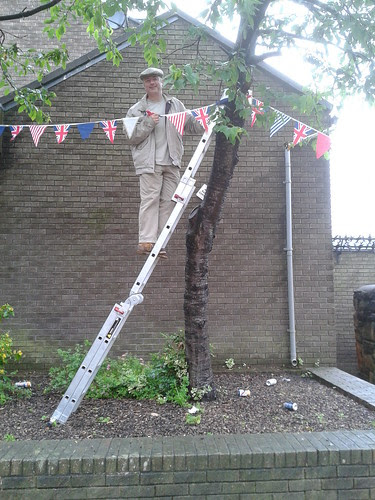 The rain held off long enough this morning for myself and Councillors John McClurey and Sonya Hawkins to put up the bunting for the Whickham Community Festival on Saturday. I was allocated the job of going up the ladder to wrap the bunting around lampposts and trees. Somehow there was no rush of people to climb the dizzy heights!

We kept an eye on the weather forecast today. It looks like we will escape much of the rain tomorrow. Not that I escaped it tonight. When I went out at 10pm to close up my henhouse, I get drenched. Posted by Jonathan Wallace at 10:57 PM No comments:

Petition handover - the history of a "myth" 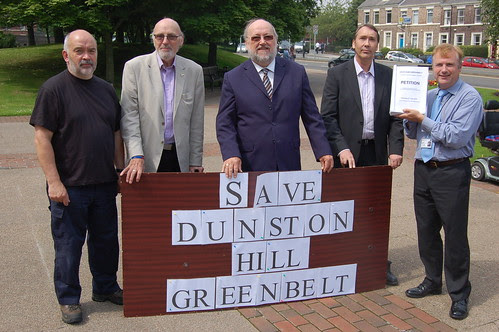 Gateshead Council is currently carrying out a strategic land review, one of the consequences of the Planning Act (2004) and subsequent planning regulations passed in 2008. A Local Development Framework, effectively the council's planning policies, is a statutory requirement and the results of the review will feed into it. As part of the review, Labour are proposing the end of greenbelt status in various parts of Gateshead and their use for house-building. One of these areas is at Dunston Hill. Local Lib Dem Councillors, myself included, have helped to get a residents' campaign group off the ground to fight the proposals. The group is now self-supporting so the councillors can step back and allow the residents to show that this is not a party political campaign.

We did however attend the handover of the petition  to the council today run by the residents which called on Dunston Hill's greenbelt status to be retained. The above photo is of Cllr John McClurey (Whickham South and Sunniside - one of my ward colleagues), Dave Fawcett from Lobley Hill and Bensham (who collected nearly 200 signatures on the petition over the weekend), Councillor Peter Maughan (Dunston Hill and Whickham East), Cllr Peter Craig (Whickham North) and myself holding the petition.

The photo below is of the residents' group. 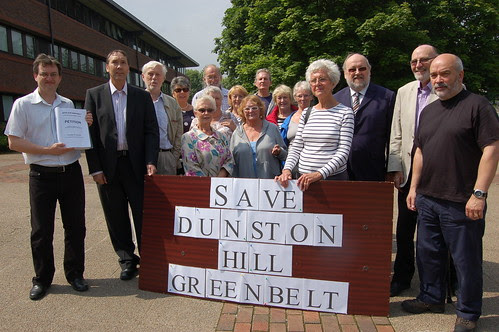 The person holding the petition on the left is Steve Potts, one of the residents who has taken a leading role in running the campaign. He became involved after we held a public meeting in Lobley Hill in February.

The greenbelt issue has had something of an interesting history, especially in recent months. Labour in the three Whickham wards, all being defended by Lib Dems in May, came up with the absurd claim that the house-building proposals we a "myth". This rather overlooked the fact that Gateshead Council had been working on developing the local development framework since 2008 and it has been before the cabinet a number of times. Quite how Labour thought they could get away with a claim that something which had occupied thousands of hours of officer time and had already been out to public consultation was a "myth" was beyond me. On our side, we made sure this preposterous claim was exposed.

People knew the claim was total rubbish. They had read enough about it in the local press, seen Gateshead Council's own publicity about consultation meetings and heard plenty about in from the Lib Dems. They knew Labour were attempting to pull the wool over their eyes, and people responded accordingly.

My ward was not a serious target for Labour in May but the other 2 Whickham wards were. All are affected to some degree by the house-building proposals and as a result, much of the election battle revolved around them. So, whoever came up with the "myth" claim in the Labour party certainly helped to boost our chances in what were very difficult defences in Dunston Hill and Whickham East and in Whickham North. In the former, Labour won with a majority of 630 last year. This year, we won with a majority of 220. In Whickham North, last year we held on by 24 votes. This year, our sitting councillor (my mother) retired, making the defence doubly difficult. Our new councillor, Sonya Hawkins, however, was elected with a majority of 100.

In our own ranks we joke that whoever came up with the "myth" claim in the Labour party is our very own secret weapon which we had managed to embed in the Labour organisation! We are looking forward to this person's influence continuing to grow amongst the "socialist" brothers and sisters.

I wonder what this person will come up with next.

Posted by Jonathan Wallace at 12:14 AM No comments: 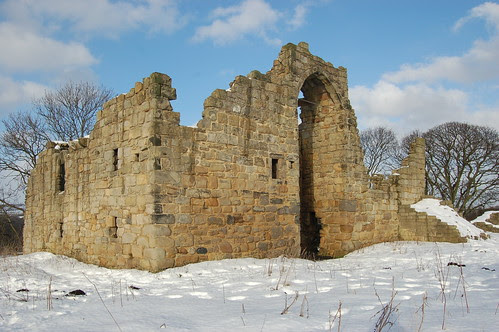 A milestone reachd on my Flickr account today. My photos have now been viewed 100,000 times. In addition, there have been 20,000 viewing of my photo stream and 14,000 viewings of my sets.

The most viewed photo is the one above. It is Hollinside Manor in the snow, taken a couple of years ago. Someone seems to have linked to it or embedded it on a website but unfortunately the stats don't say who. If anyone stumbles across it, please tell me.

My 2nd most viewed photo (1003 viewings)  is of this baobab tree I took on the tiny Indian Ocean island of Mayotte in December 2007: 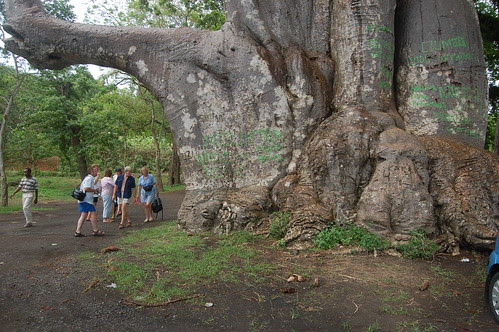 3rd most viewed (641 viewings) is of this chameleon in the jungles of Madagascar, again from December 2007: 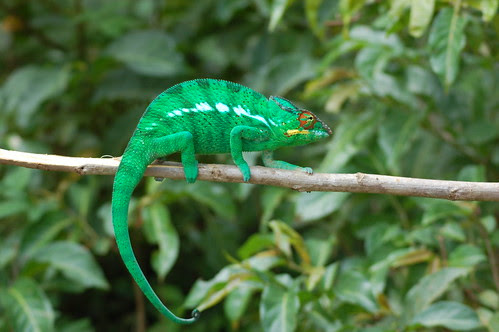 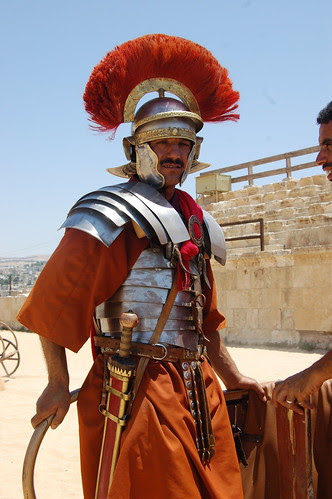 And 5th most viewed (358 viewings) was taken in October 2006 at the former Soviet secret nuclear submarine base in the Crimea in the Ukraine: 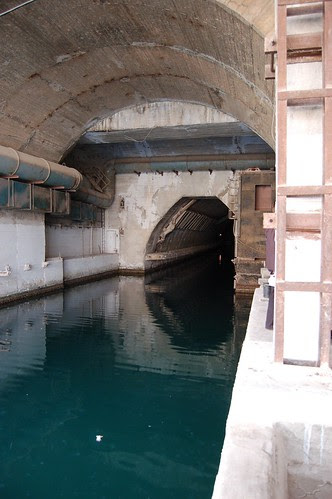 There are a further 4,393 photos but life is too short to list them!

Posted by Jonathan Wallace at 10:37 AM No comments: