Over the last few days I have completed and sent out the two regular email newsletters I produce. The first, efocus, is about local news and the work Lib Dems do in the Whickham area of Gateshead and can be viewed here.

The second is about local food production and how we survive the challenges of being self-sufficient and growing our own food. It can be viewed here.

Anyone wishing to subscribe to either can email me. Just say which newsletter you want to receive.
Posted by Jonathan Wallace at 10:43 AM No comments: 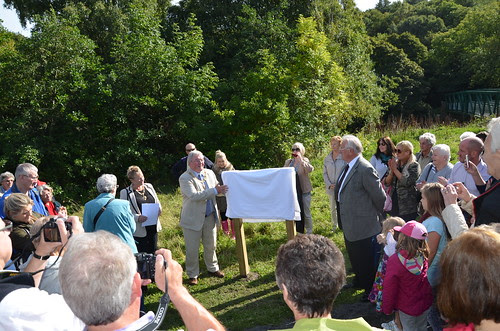 Last Saturday saw the culmination of a short project by various local history societies in western Gateshead which aimed to produce information panels about the historic crossing of the Derwent River at the site now occupied by the Butterfly Bridge. This area has had an important historical role on the Industrial Revolution and was the site in the seventeenth and eighteenth centuries of iron smelting and the early modern iron working industry. The site continued as a home for heavy industry until the 1980s. It is now a country park.

The history societies in Sunniside, Whickham, Swalwell, Winlaton and Winlaton Mill won Heritage Lottery Funding in the spring for the project to research and the history of the site and install three informaiton boards in Derwenthaugh. I had a very minor role to play, attending some of the research meetings (I am a member of Sunniside History Society). The information boards were unveiled on Saturday 21st September by the Mayor of Gateshead, Jack Graham. I acted as a guide on the day and over 100 people turned up for the unveiling.

There will be a DVD about the history of the site, made by Noel Adamson of the Sunniside History Society. My Dad, David, makes an appearance in the video. He talks about his memories of the Butterfly Bridge and Derwenthaugh area as a child. The DVD is not ready yet but should be available to buy shortly.
Posted by Jonathan Wallace at 6:43 PM No comments: 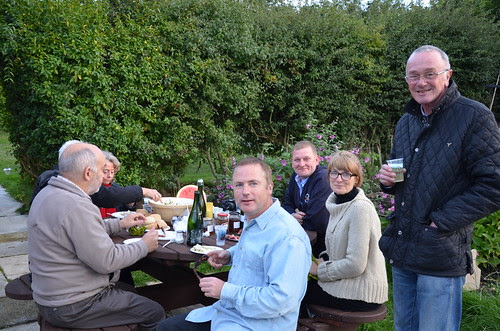 For the past 6 months I have been followed by the BBC as I aim to become self-sufficient and produce all my own food. We reached our target of becoming self-sufficient on 1st August. The last filming for the programme was on Friday evening at the Whinnies in Sunniside, where my allotment is. I hosted a BBQ, using some of the food we have produced recently. Everything was locally produced until Jimmy, a fruit wholesaler and retailer, arrived with boxes of tropical fruit! Jimmy is also featured on the programme. 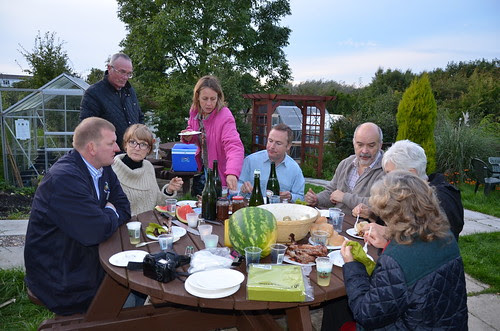 The programme is called "Inside Out" and will be broadcast on BBC1 at 7.30pm on Monday 30th September. It is a regional programme but will be available on BBC iPlayer after the broadcast. The producer and editor is Maggie Latham - in the pink jacket in the photo above.

It has been an enjoyable experience for me to be involved with the programme and I am hoping it will inspire others to grow at least some of their own food.

Posted by Jonathan Wallace at 1:09 PM No comments: 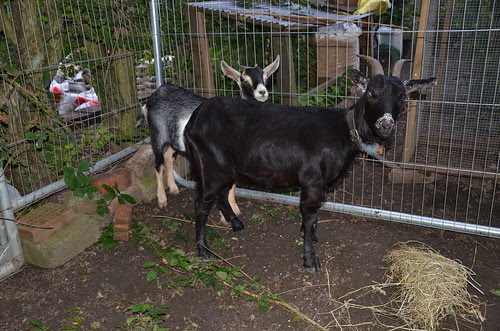 I won't be at Lib Dem Conference in Glasgow over the next few days. It is the first time since 1993 that I have missed Conference. 20 years ago I missed the gathering in Torquay as I was in the final stages of writing my PhD thesis and I had a deadline looming. This year, I am missing Glasgow because of completely different reasons. The photo above gives a hint of the reasons why. The two goats were bought by me on Thursday and are part of my drive to become self-sufficient. I am being followed by the BBC for a programme due to be broadcast shortly and the final week of filming is this coming week. The goats will have a cameo role in the programme which is about self-sufficiency. So, my Conference appearance this year had to be shelved so that I could fit in the filming and look after my new goats. It's quite an original excuse for missing Conference. I do however expect to resume my Conference attendance in York in March 2014.

It is fair to say however that I am missing Conference. A number of people have been in touch to ask if I am attending and bringing my cameras with me. My I hope to resume that service in the new year.

Posted by Jonathan Wallace at 9:04 PM No comments: 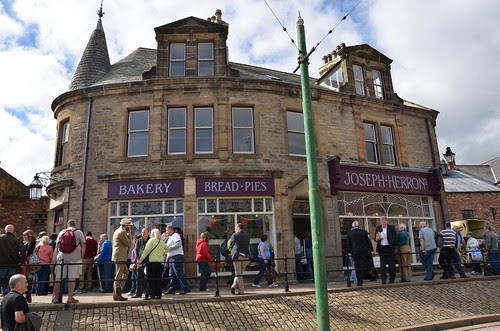 I was invited to the official opening at the new Herron Bakery today at Beamish Museum. I am on the joint committee that runs Beamish as a representative of Gateshead Council. This is one of my most enjoyable committees. Beamish is radically different from the traditional perception of museums (stuffy with lots of exhibits in glass cases). It has working exhibits, rebuilt towns and villages from the past and old forms of transport to get you around the site. The Herron Bakery is part of the Edwardian town centre and is based on a bakery from Annfield Plain. Products on sale in it are based on Edwardian recipes.

The £500,000 cost of creating the bakery were met from gate receipts. This is a museum that gets virtually no revenue funding from anyone other than the visitors paying to come to Beamish. And its popularity has made it one of the top visitor attractions in the North East (and in the country).

Alas, I could only stay for the speeches, not the sampling of the cakes and bread. I had to go straight up to Scotland later in the afternoon to pick up my two goats - they are part of our plans to become self-sufficient (more about that on www.self-sufficientinsuburbia.blogspot.com).

Posted by Jonathan Wallace at 10:46 PM No comments:

Sunniside Park today (Tuesday 10th September) saw the unveiling of the new sculptured park bench which was designed by children from Clover Hill School. The three ward councillors decided that we wanted a park bench in Sunniside Park as a way of starting to attract more people to use what is, in effect, the poor relative of other parks in Gateshead. We paid for the bench from our community fund and ensured that the children from the local school (many of whom walk through the park to get to school) were involved in the design. I suggested the Roman theme to it to help raise interest in the nearby Washingwell Roman fort.

The Mayor, Cllr Jack Graham, was on hand to conduct the unveiling, as were a number of children and staff from Clover Hill. Officers asked me to bring my cameras to get photos and video.

Posted by Jonathan Wallace at 11:11 PM No comments:

I spent four days last week taking photos at the annual conference of the Royal Society of Statisticians in Newcastle. One of the exhibitors had a gigantic cake to celebrate 10 years of their magazine. They were running a competition to guess the weight of the cake. I was persuaded to have a go. Guesses had to be in grammes. As this was a statisticians conference, I could hear lots of people working out interesting formulas with lots of variables. References were made to the density of flour, the weight of eggs and the thickness of icing. I am no statistician so was reduced to comparing the size of the cake to a 20kg sack of wheat. After all, I'm familiar with sacks of animal feed as a poultry keeper. I therefore came up with a guess of 15kg. I added a few grammes, handed in my entry and headed off to take more photos.
On Thursday morning I collected a bottle of champagne as first prize in the competition! I was only 36g short off the actual weight. Not bad for a guess based on a sack of animal feed!

Alas, the prize I was told I had won this morning is less useful to me. In August I went to the Gilsland Agricultural Show and bought some raffle tickets. I was phoned this morning to be told I had won a prize of paint-balling tickets. I’ve only been paint-balling once before. It was about 10 years ago and it was with a certain Tim Farron, before he was elected MP for Westmorland and Lonsdale. It was one of the activities we tried out on his stag weekend. You weren’t allowed simply to run around a woodland and shoot up at your own friends. Instead, you had to take part in group activities with people you didn’t know that were run more like military campaigns. My abiding memory is of my getting fed up with people who worked in offices through the week but at weekends wanted to be little soldiers who took the whole experience far too seriously. I abandoned the mini-macho men after a while and returned to my car where I did something useful (I fell asleep!)
I suspect I will be looking for a good cause to which I can donate the tickets when they arrive.

I have been in Berlin for a few days, visiting the historical sites and  apparently missing all the political action back home over Syria. I had wanted to visit Berlin ever since the Berlin Wall came down. The city has recovered from its disfigurement when the socialist government of East Germany turned the whole of their country into a giant prison in which every citizen was regarded as a potential enemy of the state (other than the socialist elite of course). It is odd to think that this appalling system of repression and government was in operation on our own international doorstep as little as 24 years ago.

My favourite places visited were the DDR Museum which has recreated a restaurant used by the socialist elite, complete with the same recipes (as a food historian this was living history to me) and fragments of the Wall around the city.

Berlin is now a tolerant and open city, a far cry from 1933 to 1989 when oppressive regimes were in place. Indeed, its openness now puts in the shade many other western, democratic capitals.

Posted by Jonathan Wallace at 4:19 PM No comments: