Manning the barricades at the fire authority

Gateshead is part of Tyne and Wear Fire and Rescue Authority. It is run by a joint committee consisting of councillors from the five constituent councils. Hardly renowned for gripping debates, the committee is unlikely to have a queue of people eagerly waiting to get into the meeting to listen intently to councillors discussing the great issues of the day. Until today, that is.

For today, I am informed, Labour put on a great show in which they manned the barricades and battled with themselves for the role of chair. Labour are the majority party so the role is theirs until such point as they lose their majority. Sunderland is the lead authority and would normally expect to hold the chair but this time, there was a challenge. Gary Haley from Gateshead threw his hat in the ring and went head to head with the new member for Sunderland. No one won. The score was 7 votes each. The vote was run again but as no one had changed their mind, the result was simply a reheat of the first one.

Could it be third time lucky? Yet again, the vote was rerun but no one was in the mood for changing. So it was another score draw. The committee broke up without a chair being appointed. An extra meeting has now been called to be held in a couple of weeks.

And if that fails to resolve the matter, presumably there will be a penalty shoot out.

I thought it was just Gateshead Labour group that were incompetent when it came to filling appointments - they were still making committee appointments 5 months after the annual council meeting last year. I have now discovered that this inability to sort an appointment extends much further in the Labour Party.

Posted by Jonathan Wallace at 9:17 PM No comments: 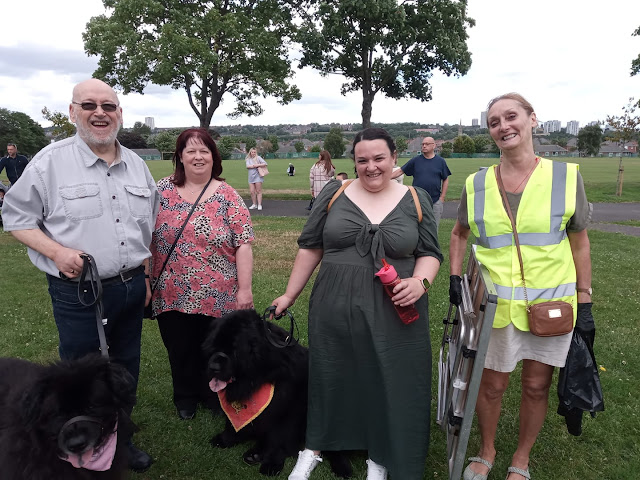 Dunston fair on Saturday was attended by local Lib Dem councillors. Cllr Peter Maughan decided to take his two Newfoundland dogs with him. The breed basically consists of enormous heaps of fur, gigantic tongues and an unfeasibly large quantity of slather. Nevertheless they were very popular with the other visitors to the fair in Dunston Park, indeed, more popular than the politicians (of both sides)! Pictured above: Councillors Peter Maughan, Amelia Ord, Vicky Anderson and Labour's Brenda Clelland who is also one of the organisers of the fair.
Posted by Jonathan Wallace at 9:45 AM No comments:

For the first time in 30 years I went to the Newcastle Hoppings last night. We got to Exhibition Park and a sudden and very heavy downpour nearly made the evening into a washout. Fortunately it lasted only 5 minutes. So, one burger, one packet of very overpriced pick and mix sweets and one ride later and we headed back home. You need to watch to the end of the video to find out which thrill ride we did!
Posted by Jonathan Wallace at 11:19 PM No comments:

Posted by Jonathan Wallace at 11:33 PM No comments:

I'm currently sitting in a briefing meeting for Gateshead Councillors with officers from Nexus and Go North East. I'm pleased to report that the 69 service has been saved. Nexus will step in to run it as a secured service. A grant from the government will pay for the service which is vital for many residents. The 69 is the main way for those without a car to get to the Queen Elizabeth Hospital. Saving it was a priority for the Lib Dem group. It should now remain in place until 2025.

Posted by Jonathan Wallace at 4:09 PM No comments:

It was the oven ready deal ready to go. All that was needed was a Johnson led Conservative victory at the 2019 general election. "Let's get Brexit done" was the winning slogan. And so it came to pass - the deal was pushed through Parliament and it appeared that the Conservatives could claim "Job done." Except that it is far from job done. It now looks like Johnson is after a fight with the EU. I suspect he wants to take on Europe because he needs to recreate the conditions of 2019 in which Europe-bashing was in part the reason for his election victory. Now he needs to rebuild support on the Tory right while hoping the broken promise of no borders in the Irish Sea is drowned out by the battle cries of an anti-EU campaign. Johnson must also be hoping that in this cacophony of noise, the people will forget that he is the author of the Northern Ireland Protocol, the agreement which is now being savaged by the Conservatives. Johnson got us into this mess. Now it's his job to get us out of it. Don't hold your breath.

Posted by Jonathan Wallace at 10:33 PM No comments:

Signed up for conference 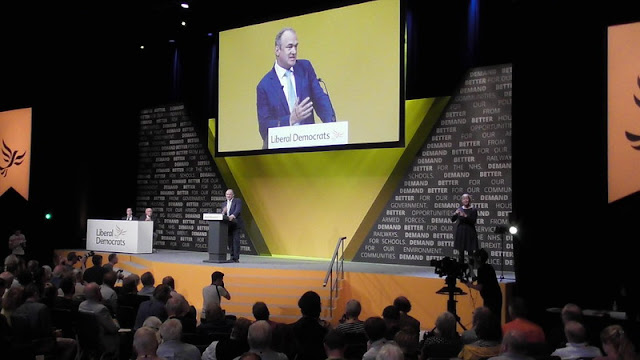 I took the plunge last week and booked my attendance at Lib Dem conference in September in Brighton. That was the relatively cheap bit. Then came the hotel booking. That was a bit more pricey. It's been over 22 years since I last had to book hotel accommodation in Brighton for conference. From 2000 to 2009 I worked for the Lib Dems in one guise or another. Conference attendance and staff accommodation were part of the job. When I "retired" in 2009 to spend more time with my self-sufficiency ambitions, when conference was at Brighton (most of the time it was), I stayed at the flat in London and commuted down each day. When Richard moved out of the flat to our house in Gateshead so I could be his carer in 2017, I put the flat on the rental market. The era of no-cost accommodation for Brighton conference had come to an end. My conference attendance then dropped off a bit before we were visited by the pandemic and the whole thing went on-line.

So I decided, for a treat, to attend conference and stay in a hotel but Brighton hotel prices came as something of a surprise! I've got 3 months to get over the shock. Let's hope the rail strikes are all ended by then. I certainly won't be driving there!

Posted by Jonathan Wallace at 11:16 PM No comments:

Ross the weatherman in Sunniside

Ross Hutchinson, the weatherman on Tyne Tees TV, was a visitor to Sunniside over the Jubilee weekend. He was there to plant a tree on the Whinnies Community Garden (see video above) and he took the opportunity to visit my Nearside allotment to see my goats and poultry. He's a keen supporter of animal welfare and keeps a number of animals himself. It was great to see him in Sunniside. 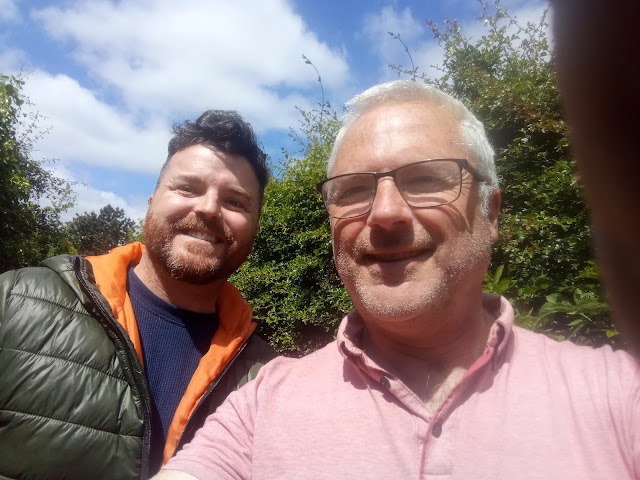 Posted by Jonathan Wallace at 10:45 PM No comments:

So, the expected Conservative confidence vote in Johnson is to take place today. Expect a Johnson win but for him to emerge as a wounded victor. Assuming he does win and then manages to survive as Conservative leader, he could limp on to the general election where the candidates from the 2 larger parties will be the buffoon versus the bore. What a choice that will be!
Posted by Jonathan Wallace at 9:21 AM No comments: