I decided not to stay up all night to await the result of the Shropshire North by-election but I waited until 1.30am to get an indication of how the count was going before heading to bed. That's when the Lib Dem prediction of a comfortable gain came through. Presumably, our people had finished crunching the numbers and were able to project the result. By then, a result much closer to home had come through: a council by-election in Hexham East in Northumberland saw a Lib Dem gain from the Conservatives. So off to bed I went and awoke this morning to news of a Lib Dem majority of over 5000.

My usual preference for 24 hour news coverage is Sky News over the BBC but the former was rather disappointing this morning. Much of their focus was on giving Labour lots of airtime while one of their shadow cabinet members waffled on for ages avoiding questions about why Labour failed to capitalise on their 2nd place in 2019. Meanwhile the BBC had a much more interesting angle - the danger to the Conservatives of a revived Lib Dems.

Those of us who were politically active in the 1980s and 1990s will remember the big swings in by-elections to the Lib Dems. A long running revival of the Lib Dems (and the predecessor Liberals and SDP) was underway which eventually led to the electoral breakthrough in 1997 and government in 2010. Obviously this did not last and we went back to a position similar to the Liberals in the early 1970s.

I've been in politics for so long that I've learnt not to get overly excited about an individual result. But are the BBC right to suggest there is a Lib Dem revival underway? Include the local elections from earlier this year, the Chesham by-election in the summer and local by-election results and there is more than a hint of a national Lib Dem revival.

Here in Gateshead in May this year, the higher than usual Conservative vote saved Labour's bacon in a number of wards. We had some near misses which would have been Lib Dem gains if the Conservative vote had not been so vibrant. Well, that vibrancy has now gone. And that means Labour council seats in Gateshead are up for grabs.

Posted by Jonathan Wallace at 10:42 AM No comments: 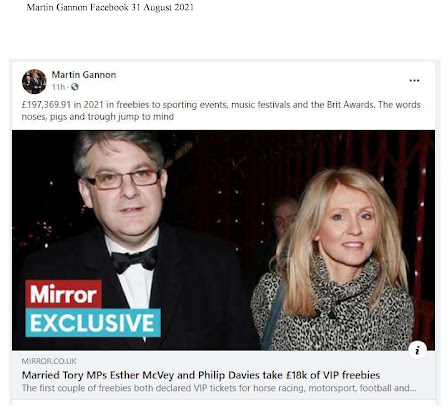 Gateshead Council's Labour leader, Martin Gannon, had an interesting Facebook post recently (see above). For once it wasn't a post that attacked me but rather it was a barbed assault on MPs who accept free gifts, such as trips to sports events, dinners, tickets to the Brit Awards and so on. In a 6 month period, MPs had clocked up a range of gifts with a total value of £197,000. Martin wrote, "The words noses, pigs and trough spring to mind."

Let's just hope Martin himself couldn't have the same words applied to him. Well, it was easy enough to check on Gateshead Council's website. There all gifts received in connection with a member's role as a councillor must be declared. I decided to take a look.

A bottle of champagne, flowers, trips to the races, tickets to the theatre and lots and lots of dinners (including some abroad)!

If you would like to read all about Martin's gifts, click on the following link. Just be warned that it is a very long list and you may want to turn your nose up at it! But don't pig out on it!

Posted by Jonathan Wallace at 6:14 PM No comments: