My latest email newsletter to residents

This is edition 81 of my email newsletter, published today. Click here to read it.

Posted by Jonathan Wallace at 12:40 PM No comments:

Getting my Christmas exercise in early

On Thursday, Labour in Gateshead voted to remove large amounts of land from the local greenbelt and redesignate it as land for house-building (largely executive style housing). We have been fighting these plans for years. Labour tried to pull the wool over people's eyes, claiming until recently that the plans were a "myth". It was a claim that backfired spectacularly when one of the most affected wards, Dunston Hill and Whickham East, which Labour won by 600 votes in 2011, was won by the Lib Dems in 2012 with a majority of 300. We are hoping the same person who ran Labour's campaign then will be running it in the months ahead for the 2014 local elections.

Anyway, residents needed to be told about Labour's decision, so on Friday we delivered thousands of letters across the areas most affected in Dunston, Whickham, Ryton and Crawcrook. It was good exercise before Christmas. My job was to shift 1000 letters in Dunston Hill, along with my colleagues John McClurey and Marilynn Ord. We were finished by lunchtime. So lots of calories were burnt off before Christmas!
Posted by Jonathan Wallace at 12:18 PM No comments:

Saturday saw the first Whickham Christmas market run by Lighting Up Whickham group which was set up to raise funds for the Christmas decorations in the village. The market was in a marquee which was provided free of charge by the Rotary Club. 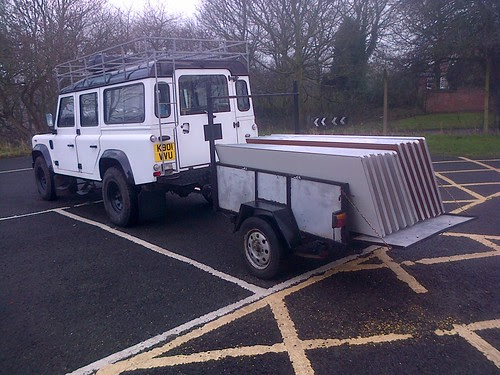 My job was to book the stallholders, get tables from Marley Hill Community Centre to Whickham (that's them in my trailer in the photo above), promote the event and help set it up. I also had a stall selling my honey (which ended up selling out). 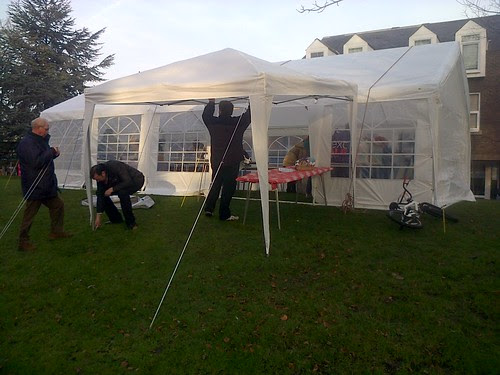 There was only room for 9 stalls in the marquee but it went up on time and opened at 11am. My colleague Cllr Peter Craig helped run the tombola and through the day we had a visit from the Mayor, Cllr Jack Graham 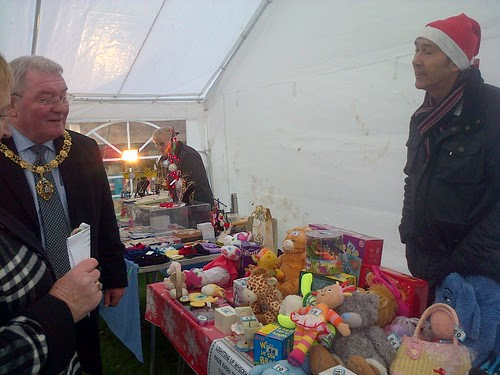 As this was a first event of its kind for us, we were on something of a learning curve. It was a great success however and we will be looking to repeat it in the future. Plenty of people come to the market and the stallholders reported brisk trade. 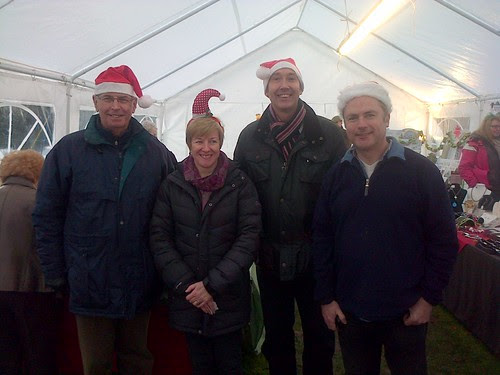 Pictured above: George Craig, Lorena Dayson, Cllr Peter Craig and me. All of us were part of the organising group.

Posted by Jonathan Wallace at 8:53 PM No comments: 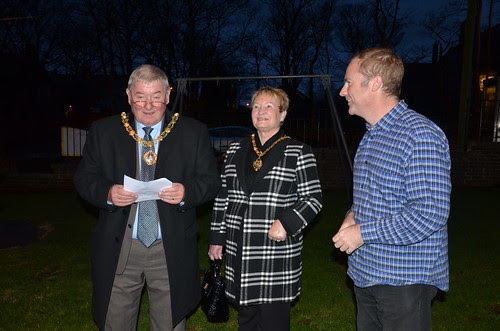 Mayor of Gateshead, Jack Graham, was in Marley Hill on Sunday to switch on the Christmas tree lights at the front of the Community Centre. This was the first time we had had an outdoor tree at the centre and the first time we have run a Christmas event like this. My job was to organise the day, run the craft market and the cafe and generally make sure the whole thing held together.

We put the play equipment out at 9am to keep the kids occupied. Whickham Wind arrived at 3pm to play Christmas tunes and they were a particular hit with the children. The mayor did the switch on at 4pm. The whole day went very well. It looks like this will be an annual event from now on.

And as we were running the Allotment cafe throughout the day, people brought in produce to swap for our preserves. We got a good supply of apples, onions and leeks. 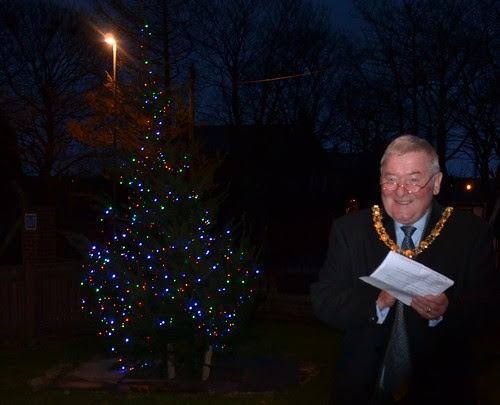 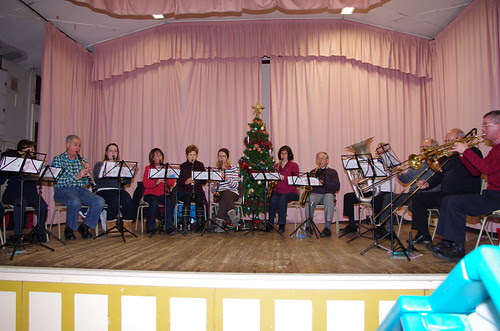 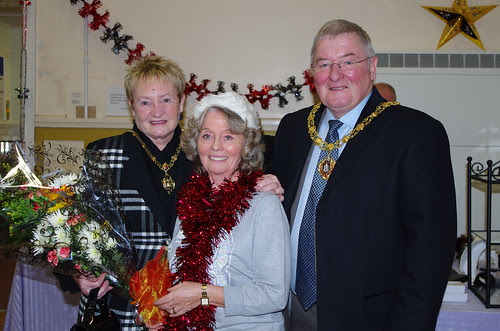 Posted by Jonathan Wallace at 8:51 PM No comments:

I sent out our latest email newsletter last night to over 1000 households in the area. It covers the Whickham Remembrance Day parade, Whickham's Christmas lights switch on, the Mayor coming to Marley Hill, my BBC self-sufficiency programme, Swalwell residents' group, the forthcoming Whickham Christmas market and much more.  You can view it on this link.
Posted by Jonathan Wallace at 11:24 PM No comments: 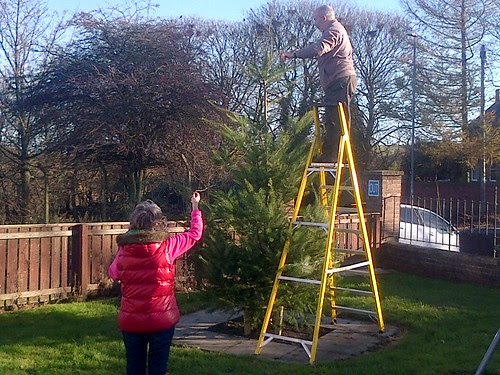 The preparations for the switch on of the Christmas tree lights at Marley Hill Community Centre took a step forward yesterday when Councillors John McClurey, Marilynn Ord and I decorated the tree with the lights and tested them. Despite the blustery cold wind, we got the job done.

The Mayor arrives on Sunday 8th December at 3pm. Live music with Whickham Wind starts at 3.30pm and the lights are turned on at 4pm. Everyone is welcome.

Meanwhile, we have even made a start with decorating the hall. The craft market and community cafe will be held there on Sunday as well.

Posted by Jonathan Wallace at 2:24 PM No comments:

The faces behind Balls

Having just watched the Autumn Statement, the activity behind Labour's Ed Balls caught my attention. Actually, it should better be described as lack of activity. Whilst Balls ranted and shouted in response to the Chancellor, the faces of his leader Ed Miniband, the deputy leader Lady Harriet and other Labour MPs in shot were glum and largely motionless. Whilst we have been spared the ear-busting screech of Harriet (listening to her is only marginally more preferable to fingernails clawing their way across a blackboard), it seems there was a lack of enthusiasm for Balls. This is all the more surprising given that I am used to Labour members madly cheering their own people, regardless of actual performance. Indeed, they would applaud one of their own members breaking wind! Perhaps the reticence this time was a genuine response to what was, generally, an unimpressive speech by Balls. My guess is that, as an economist, his enthusiasm for Labour's "economic policies" (what few they have) is moderated by his knowledge that they are unlikely to work.
Posted by Jonathan Wallace at 12:44 PM No comments: