Where Eagles dare to moan

Gateshead Labour Councillor and former mayor John Eagle is never far from controversy when sitting at a keyboard. Sadly, no action was taken against Cllr Eagle by the Gateshead Labour group when he backed a Facebook site calling for the violent murder of Margaret Thatcher. Another Labour councillor in Sunderland who backed the same site was suspended.

Moving on from that, Cllr Eagle has now decided to take aim at the residents of Gateshead themselves, more specifically, those who live in Low Fell. A council plan that reduced car parking on Durham Road next to the shops to increase the space available for socially-distancing shoppers sparked a public debate. Alas, John decided join in the debate on a Low Fell residents Facebook page. His contribution to the debate was to attack residents who raised concerns as "whingers and moaners". Apparently, according to Jaguar-driving "socialist" John, some people believe the "world begins and ends in Low Fell."

Fortunately for the residents of Low Fell, they aren't represented by Cllr Eagle on Gateshead Council. That privilege falls to Lib Dem Councillors Susan Craig, Ron Beadle and Daniel Duggan. John is actually the member for Bridges ward where he appears to have taken a vow of public silence over the gigantic changes to the road system that resulted in gridlock in the town centre and a high speed uturn by the council. I can find no public comments by Cllr Eagle regarding the biggest transport issue to hit his ward in many years. Perhaps Cllr Eagle's comments got lost in the Gateshead town centre traffic jams. Or maybe he's too busy taking potshots at residents elsewhere in the borough. 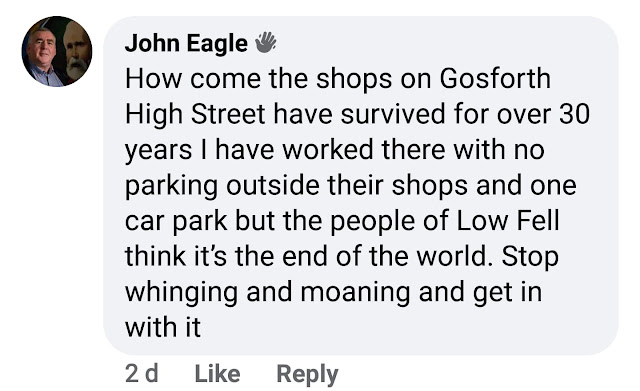 Posted by Jonathan Wallace at 10:44 AM No comments:

Just published: edition 139 of eFocus for the Whickham area. Contents include:

1)How to find out which local businesses are taking part in the Eat Out to Help Out scheme;
2)Plans to open leisure facilities, libraries and heritage centre in Gateshead;
3)Meet friend and family online;
4)Tanfield Steam Railway reopens;
5)Queen Elizabeth Hospital is national leader;
6)Recycling and waste centres accept full range of waste;
7)Sunniside History Society meets online.
If you want to receive eFocus directly to your inbox, email jonathanwallace329@gmail.com with the message "subscribe". Please include your name and home address.
You can read eFocus on this link.
Posted by Jonathan Wallace at 11:51 AM No comments:

Our production of eFocuses - our email newsletters to residents - has been on overdrive recently. The Low Fell team has been the most productive. A few  be viewed of our recent editions can be viewed on the following links:

Meanwhile Whickham edition 139 is nearly ready to go. The circulation list has had a modest increase recently as people have contacted us directly to be included. Welcome if you are one of those recently added.
Posted by Jonathan Wallace at 10:28 PM No comments: