You can read eFocus on this link.

Posted by Jonathan Wallace at 10:35 AM No comments:

Time is running out to use your postal vote 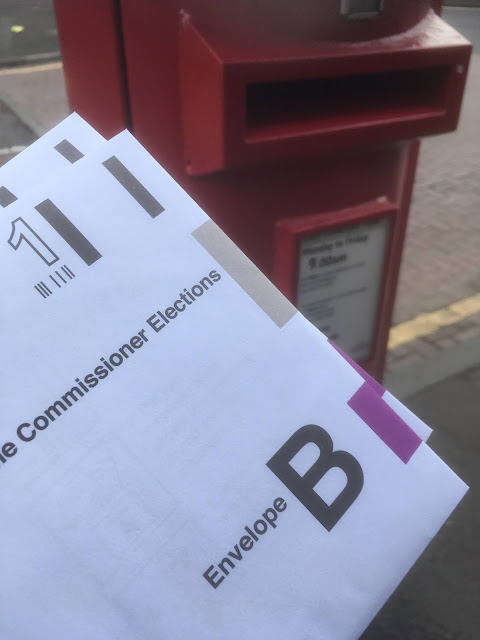 Time is running out to use your postal vote in the local elections. Please make sure you get it into the post to arrive at the Council on Thursday 6th May. You can also take your completed postal vote to your local polling station on Thursday. (Polls close at 10pm)

Posted by Jonathan Wallace at 10:13 AM No comments:

Labour in Gateshead last year created a traffic management scheme that has added enormously to congestion and air pollution. Lib Dems exposed the cost of the fiasco - £500,000. Labour are not happy and in their typical one-party state approach, they are pursuing a complaint against Lib Dem Councillor Daniel Duggan who first exposed the costs.

The traffic fiasco has not gone down too well with residents. Indeed, it has been an appallingly bad news story for Labour, but in their wisdom (or lack of) Labour keep banging on about it on social media. Yesterday they reposted the Labour post attacking Daniel to the Felling Group Facebook page, which has a readership running into thousands.

Alas, for Labour, their regaling of the traffic fiasco (which they claim is "fake news") has backfired spectacularly. There have been hundreds of comments from residents and, excluding the pro-Labour comments of the Labour activist who first reposted to the page, there are no positive or supportive comments about Labour and their traffic management scheme. Indeed, residents were lining up to put Labour through the shredder. Here are a few of the comments:

"Perhaps it’s time to vote a different way and lose the “I’ve Always voted Labour” Mentality in this area and give someone else a try."

"What a joke they should investigate themselves for all the money they waste , hopefully they will be out soon enough"

"Labour council for Gateshead has wasted a lot of publics money it's about time the people of Gateshead know what is going on!"

"What Gateshead Labour Party did with that fly over was an absolute disgrace, not only costing the local taxpayers money we could ill afford to spend, it caused absolute havoc on the roads at a time we were already suffering under COVID rules. .... And what are our Labour council doing to apologise to its voters? Nothing. Not a single thing! Any apology to its electorates ? NO! Instead they are “investigating” some Lib Dem councillor for keeping it in the public attention!"

"Don’t think this post is going well, especially for the labour council."

"this post isn't getting labour any votes its doing the opposite"

Why Labour were silly enough to repost about their attempt to silence Daniel is beyond me. It was an open invitation for people to get angry with Labour. They have done a great job for the Lib Dems - on the eve of the local elections they have put back into public consciousness what is for Labour a bad news story. Well done!

Posted by Jonathan Wallace at 11:38 AM No comments:

And the winner of the worst election video is.....

The Oscars have just been held. I wonder whether Labour in Gateshead will be entering one of their videos in the category of "Worst Election Video". The likely winner would be Calvin Lawson's cringe-making 7 second video in which he lip syncs to "If you're feeling like you need a little bit of company" by Dua Lipa. If you are feeling up to the task of viewing it (warning: strong constitution needed) feel free to click on this link.
Interesting use of music which is, of course, copyright. Reproducing it requires various licenses and appropriate royalty payments which will need to be included in election expenses returns!
Posted by Jonathan Wallace at 6:37 PM No comments:

Labour talks up the Conservative vote 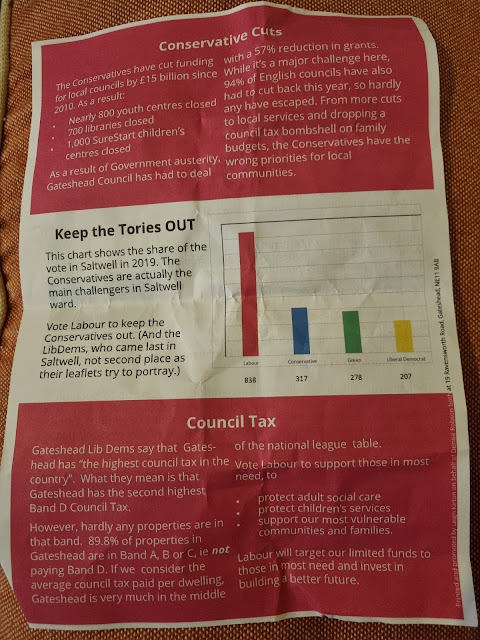 This is a Labour leaflet circulated in Saltwell ward in Gateshead. I was rather amused by the appearance of a bar chart, given Labour's regular attack on Lib Dems for using them! As you can see in the last local election in the ward, Labour were comfortably ahead and the 3 opposition parties were within 110 votes of each other. The headline of "Keep the Tories OUT" may come as something of a surprise to residents of Saltwell, indeed to residents across Gateshead. There is zero campaigning from the Conservatives in Gateshead. We are aware of only one ward in which they have distributed an election leaflet (and it isn't Saltwell!) and it went out after the postal votes were distributed.

So why talk up the Conservative vote in Gateshead in Labour literature? (And then use much of the rest of the leaflet to attack the Lib Dems?) The answer is that Labour knows they hold on if the opposition vote is split between different parties but they fear the consequences of non-Labour voters lining up behind the Lib Dems. After all, that has delivered victory for the Lib Dems in a number of wards in Gateshead. Perhaps Labour fears this happening across Gateshead.

Finally, the first para of the Council Tax article is a classic example of how not to write a leaflet! So a thank you to Labour for focusing on what is for them a bad news story, thank you for quoting one of our key anti-Labour messages and thank you for the admission that Gateshead's council tax under Labour is the second highest in the country!

Posted by Jonathan Wallace at 9:54 AM No comments:

The arrogance of Labour

The Labour Party in Gateshead tend to view the area as a one-party state and any opposition to them tends to be treated as insurrection and insubordination. There is an uncomfortable level of arrogance from Labour who have run the Council since it came into existence in 1974. Take a look at the above Facebook post from Labour candidate for Low Fell Calvin Lawson which was posted last year when it was announced the local elections were to be postponed. He hadn't been elected (the ward is Lib Dem held so is treated by Labour as an area of insurrection) yet he talks of Low Fell being a personal chattel. No mention of needing to win an election, just a bald statement that the ward will be his. How arrogant can someone be?

I prefer to let the people decide who represents them on the council. Await the outcome of the democratic process first Mr Lawson. And whoever wins a ward, on any council, should always remember that it is not theirs, they hold it in trust on behalf of local residents until such time as those same local residents decide to elect someone else.

Posted by Jonathan Wallace at 8:52 AM No comments:

Labour seem to have an imprint problem in Gateshead. Perhaps their literature skills are a bit rusty. We have local and Police Commissioner elections on 6th May. Labour therefore have come out of hibernation and have started to produce joint leaflets about the upcoming contests. But there is a problem. Inclusion of an imprint for the PCC is required if the literature refers to the PCC candidate, and Labour appear to have overlooked this legal requirement. I think Labour will need an industrial paper shredder to resolve that problem! We have of course brought this to the attention of Labour via their council leader, Martin Gannon. He has suggested we need to speak to the police.

We are considering our options.

Posted by Jonathan Wallace at 9:47 AM No comments:

We recently published edition 155 of eFocus for the Whickham/Dunston/Swalwell/Sunniside/Lobley Hill/Marley Hill area. Key issues covered include:

You can read eFocus on this link.

Posted by Jonathan Wallace at 10:25 PM No comments:

We have now launched our first election video in Gateshead, looking at Labour waste in the borough, including the central Gateshead traffic management plan (£500K), the new Quarryfield car park which is soon to be ripped up (£750K) plus other sums on refurbishing the Labour leader's office in Gateshead Civic Centre and repairs to crematoria equipment that was scrapped months later. We have lots of other examples as well but I wanted to keep the video relatively short!

Posted by Jonathan Wallace at 10:18 PM No comments: 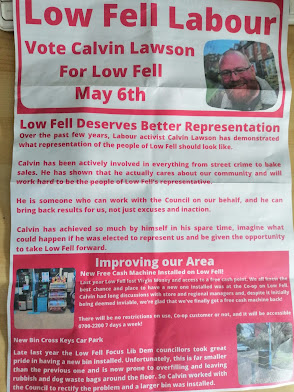 Calvin Lawson is Labour's failed candidate in Low Fell, Gateshead. His attempts to snatch Low Fell from the Lib Dems in previous elections have not exactly been beacons of success. As he drifts further and further behind the Lib Dems, what could he possibly do to turn around his fortunes so he can realistically mount a challenge in the ward? Well, don't try this at home, but Mr Lawson's election leaflet has taken the need to get noticed to the extreme. He informs the good people of Low Fell that "Calvin is actively involved in everything from street crime to bake sales."

Yes, you read it correctly, his leaflet does say he is not only "involved" but is "actively involved" in "street crime"! Oh dear, no doubt this is just an embarrassing error for everyone to read on the front page of his election leaflet. Quite how Mr Lawson and his hapless agent Cllr Leigh Kirton managed to miss this glaring statement leaves me scratching my head. Assuming the statement is not true, and that he meant to say that he is "fighting street crime" (at least I hope that is what he is trying to say), what next for Mr Lawson's campaign? I assume it is too late for a change of agent (and we would encourage Mr Lawson very strongly to keep Leigh Kirton in place).

So, is it time for the shredding machine to be brought into use? If it is, can I have the shredded paper for bedding for my livestock? At least that way, Mr Lawson's leaflet will at last serve a useful purpose.

Meanwhile, I must read up the Lib Dems' policies on the rehabilitation of offenders actively involved in street crime. After their punishment, we must ensure they can be turned into something useful to society.

Posted by Jonathan Wallace at 10:22 AM No comments: