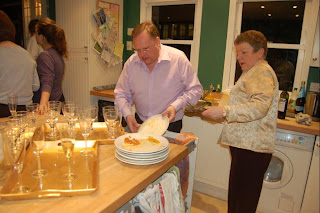 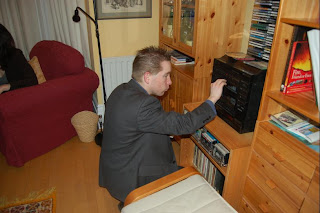 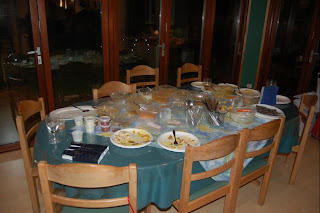 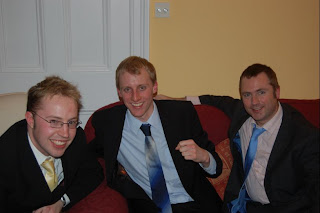 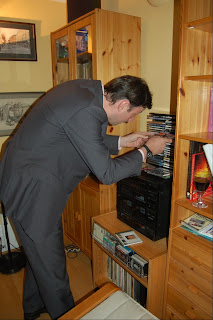 We had a bash at Chris Rennard's house in South London on Thursday so that Media, Communications and Policy staff could meet Jon Oates, the new Director of Communications. Inevitably I turned up with a camera. So here's the pick of the crop.
George Crozier and Greg Simpson went head to head to battle over whether it was the Carpenters or the Eagles that were played.
The Media Centre in particular is known for eating all available food in Cowley St. Their eating skills were applied to the food on offer which was polished off in record time, leaving Lord and Lady R to do the washing up.
And strangely, people decided I had to appear in a photo for once and snapped me with our PCU volunteers Matthew Lavender and James Cooper.

Posted by Jonathan Wallace at 7:04 PM

I remember the so called good old days when I was child the 1950s.I remember watch with mother and the The Woodentops on the TV never thought I would see school children going without a cooked meal without being stigmatized by their schoolmates some 50yrs on. There again I never thought The Woodentops would end up running the country.

Bon appétit at your bash Jonathan.

Thinking about free school meals has brought back many memories of my own childhood that I wish to share with you...

I remember three of us sharing one book at reading times because there weren`t enough books to go round in a class of well over 35 children.I remember being told to stand up and read allowed to the class from the book we had I couldn`t as some of the pages in the book were missing they were very old reading books and had been used by many children over the years.Then I remember being told to swap books with the table next to mine I sware before God that the pages were missing from that book too.I was not the only one this happen to.

I remember we had inkwells recessed into our desks and had to dip our pen nibs into them the pen nibs had seen better days thats for sure.I remember going up to the teacher and asking for a new nib as mine was broken all he did was to sort out all the broken nibs he had and gave me one that was worse then the one I already had.I also remember that some of our desks tops had broken hinges and came right away from the desk.

I remember some of my classmates not having any money to pay for school meals (same as today) they used to hang about in the school playground at dinner times.Fifty years on and this is the progress we have made did I say progress I think NOT.

I also remember we had a tory government as we have today.

Nice for Lord Rennard to have a house. For many putting a roof over their heads is but a dream. If the Lib Dems were a party that cared they would be saying they WILL build ONE MILLION HOMES. I suggest to the plans off the Thompson 3 bed semi of the 1930s. This would also go along way to cure this...Liberal Democrat Councils fighting crime and acting on environment across the country
3 April 2007

But the Lib Dems think that this is not Achievable that is their bankrupcy, no ambition.

It has always been a total enigma to me that during/after the 1929 depression Britain built so MANY three bedroom houses they were called the Thompson three bed semi with gardens.There must have been so many built,well built houses built to last not like the LOW quilty houses being built today.I have tried to find out how this happened spent many hours searching the web to try and find out the thinking behind the times but to no avail.Where did the money come from to build them all when times were so hard?.Why didn`t this government get out the plans from the late 1920s and build more instead of building the high density compressed housing that they are now allowing to be built?.They must know by now that this kind of housing leads to social problems,brings about stress and depression and a host of mental problems and marital problems due to bad housing and the cost of housing being a large factor in all this.All about profit and keeping green belt in the hands of the rich is all I can come up with.They never learn from there past mistakes but there again that is another enigma?.

Not enough money to go round to do what I have suggested in the above posts. This is one of the main reasons...

"A bumper City bonus season is drawing to a close. An estimated 8.8
billion pounds has been dished out to City workers, with 4,200 of
them
receiving bonuses in excess of 1 million pounds. The usual tales of
conspicuous consumption follow, washed down with champagne, while the
rest of Britain looks on."

This is New Labours/Tories/Lib Dems dream, Our NIGHTMARE.

Nothing is easier than to denounce the evildoer, and nothing is more difficult than to understand him.

I remember reading back in the days when Thatcher was Prime minister a doctor in Liverpool reported the first case of Ricketts disease in a child caused by deficient of Vitamin D not seen since the 19th century.

Vitamin D levels are needed for the health of the thyroid, estrogens, calcitonin, human growth hormone, prolactin, insulin, and glucocorticoids. Vitamin D helps regulate calcium absorption from the diet, and is important for healthy bones.

I would say that is of paramount importance in Young Children. I believe that a more nutritious diet for schoolchildren has a central role in combating this public health problem. There is of course Scientific research on British children suffering behavioural and learning disorders because their diets are deficient in vital nutrients needed for their brains to function normally.We must ensure that children get FREE school dinners.

I would also say that the "public health problem" we have is once again NEW Labour/Tories/Lib Dems.