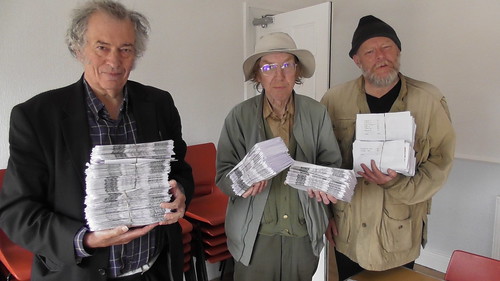 Gateshead Lib Dems had an action day in Dunston Hill and Whickham East ward yesterday. The aim was to deliver our local Focus. As a back up in case we completed that job was to make an incursion into Labour held Lobley Hill and Bensham ward to deliver a survey form. Job done on the Focus delivery though some members took patches for delivery over the next couple of days. So we managed to get a few hundred surveys delivered in Lobley Hill. We have about 700 left to do which will go out over the next few days.

It was good to see new members helping as well as established ones (such as our "delivery machine" of Paul Gibson, Robin Stanaway and Ian Patterson).

Pictured above: Nick Smeaton from Bensham, Peter Maughan, Lib Dem candidate for Gateshead and Cllr Kevin McClurey who joined me for an incursion into Labour held Lobley Hill. Sadly I wasn't in the photo as I had to operate the camera!
Posted by Jonathan Wallace at 9:30 AM